Prior to his historic dive to the bottom of the Mariana Trench, James Cameron explored the 8.2 km deep New Britain Trench, a region never before explored by human or robot:

In terms of biology, the New Britain Trench looked like New York City compared to the desert at the bottom of the Mariana Trench. On dives with the submersible and with robotic vehicles, the team found thriving communities of acorn worms and sea anemones at the bottom of the New Britain trench, which were fed by nutrients coming from nearby islands. “There was a lot of nutrient input,” says Douglas Bartlett, a microbiologist at the Scripps Institution of Oceanography in La Jolla, California. “It was incredible to see logs at 8.2 kilometres.” 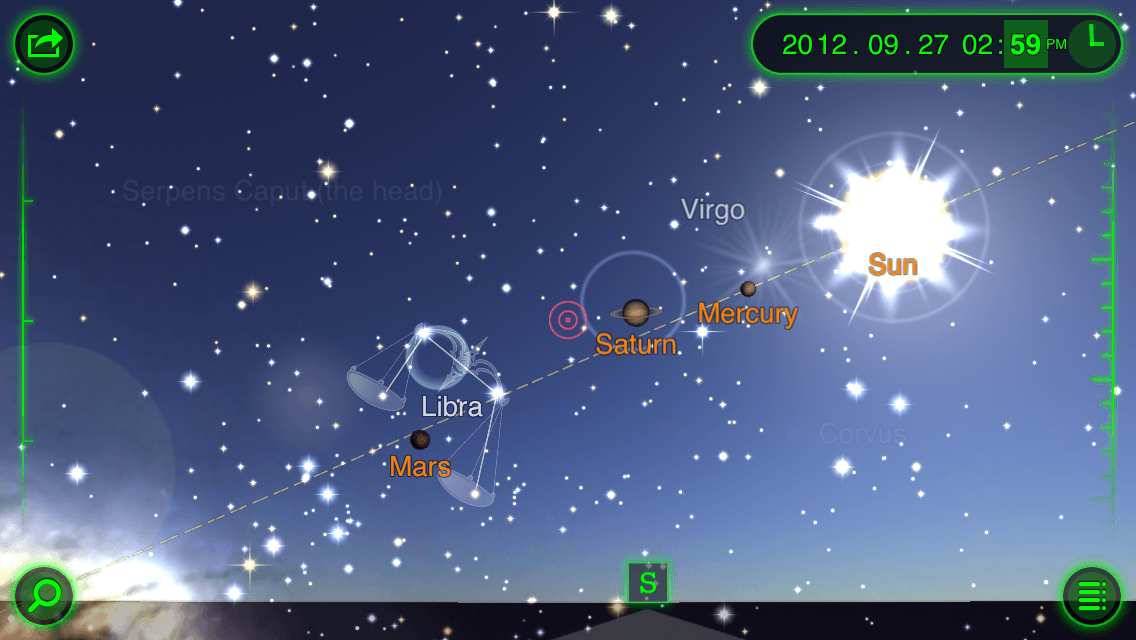 I’ve been using Star Walk 6.0 from Vito Technology Inc. since its release on August 29th (and earlier versions since their release), and I’d like to share some thoughts on it. As far as stargazing apps go, this is my go-to app for my teaching assistant position at the University of Alberta’s Observatory. As of this writing, Star Walk is available on the app store as two separate apps for the iPhone ($2.99) and iPad ($4.99). Upon launching the app you’ll be greeted by the title screen above, and after a short loading period you’ll be taken to the current view of the sky. As with all stargazing apps, you’ll want to allow the app to know your location so it can display the most accurate representation of the sky over your location. One of my favourite features of Star Walk is the dynamic object labelling. In the image above, the three brightest stars, Vega, Altair and Deneb (who form the summer triangle) are all give yellow labels, as opposed to the white labels given to the constellations in the view. As you zoom into a view like this, the labels of the brightest stars appear, and zooming out causes them to disappear, reducing clutter on the screen.

If you’re interested in more information on a particular object, you can select the object by tapping on it, bringing up a menu that gives you several options. The ‘Did you know?’ option gives general facts on the type of object, ‘General Information’ brings up facts related to the particular object that you’ve selected, ‘Figures’ gives specific information like the location of that object in the night sky, it’s visual magnitude and more. Finally, there’s a Wikipedia button, for a more in depth look at the object. If you raise your iPhone or iPad above your head, Star Walk will switch into an augmented reality mode that displays the region of the sky behind your device. This is incredibly useful for amateur astronomers who are interested in identifying an unknown object, or finding the stars for a particular constellation. From this mode you can even select  the camera icon in the upper right corner to turn on your devices camera – which then overlays your current view with the stars and constellations from that part in the sky. This feature works a lot more smoothly than some of the other stargazing apps that I’ve tried (reviews to come), but the odd time I have to re-calibrate my compass by waving the device in a figure of eight. Finally, Star Walk includes a feature called Sky Live which is accessible from the menu icon in the lower right hand corner of the app. Sky Live gives you a quick view of what’s up in our solar system by listing the rise and set times of naked-eye visible objects like the Sun, Moon, Venus, Mars, Jupiter and Saturn.

There’s a lot more to Star Walk than I could include in this review, but come back periodically because I’ll be doing incremental updates whenever a new feature is added!

Star Walk was updated to include support for the iPhone 5’s bigger screen and added improvements in iOS 6. Here’s a screenshot from the new version – notice how roomy the app feels now! Hello there, and welcome to my new website, spincrisis.com.

There’s a whole lot in store for this website, and I hope it becomes a platform for me to share my ideas, interests and opinions about things I find in my day to day life. I’ll be polishing off rough edges for the first few months, so things are going to be rocky before they can be smooth.

Thanks for stopping in.