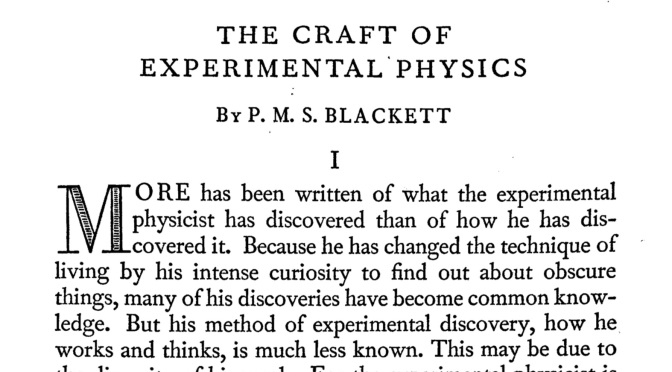 It’s been a long road, academically speaking, getting to where I am today. I began as a graduate student in September 2008, putting me just over the 6 year mark on the road to getting my PhD. The path has been fraught with difficulties, most frequently stemming from feelings of inadequacy due to an effect called the Impostor Syndrome, an affliction that is so common to graduate students, many institutions offer advice to their students.

Yesterday, I ran upon an article that staunched these feelings, only a week before my PhD defence (it couldn’t have come at a better time). An article, written in 1933 by Baron Blackett, entitled “The Craft of Experimental Physics” describes what I consider today to be a lost appreciation for hands-on experimentalism. In addition to the image above, let me quote from the first page of the article:

For the experimental physicist is a Jack-of-All-Trades, a versatile but amateur craftsman. He must blow glass and turn metal, though he could not earn his living as a glass-blower nor ever be classed as a skilled mechanic; he must carpenter, photograph, wire electric circuits and be a master of gadgets of all kinds; he may find invaluable a training as an engineer and can profit always by utilising his gifts as a mathematician. In such activities will he be engaged for three-quarters of his working day. During the rest, he must be a physicist, that is, he must cultivate an intimacy with the behaviour of the physical world. But in none of these activities, taken alone, need he be pre-eminent, certainly not as a craftsman, for he will seldom achieve more than an amateur’s skill; and not even in his knowledge of his own special field of physics need he, or indeed perhaps can he, surpass the knowledge of some theoretician. For a theoretical physicist has no long laboratory hours to keep him from study, and he must in general be credited with at least an equal physical intuition and certainly a greater mathematical skill. The experimental physicist must be enough of a theorist to know what experiments are worth doing and enough of a craftsman to be able to do them. He is only preeminent in being able to do both. (Emphasis added.)

Never, in my academic career, have I felt so vindicated in the path that I’ve chosen. Not only that, but pause for a second and just think of when this article was written. It was written during the adolescence of modern physics; before semiconductor transistors, radar, space-flight, nuclear power, before software and the internet. To hear someone speak such a truth that resonates so strongly today has breathed new confidence into me.

Many of you know already that I am preparing my next steps post-PhD. So it is that I proudly state, whatever the future may hold, I am an experimental physicist, which is what I’ve worked towards earning a PhD in.

Soon I knew the craft of experimental physics was beyond me – it was the sublime quality of patience – patience in accumulating data, patience with recalcitrant equipment – which I sadly lacked. -Abdus Salam, Nobel Laureate